IT Outsourcing: Is Mexico the new India?

IT Outsourcing: Is Mexico the new India?

Over the last decade, with the explosive growth in outsourcing to India, many daunting new challenges have arisen. Not only that India is no longer the least expensive option, but also the time zone difference once considered an asset on the Indian it services, is now widely seen as a liability in today’s Agile development environments.

Mexico has positioned itself as a highly competitive destination to outsource software development through nearshore development.

These challenges have created a shift in the demand of IT services to “nearshoring” - to the countries of Central and South America; services that Indian firms became famous for offshore outsourcing, engineering, maintenance, tech support, business processes, quality assessment, bug fixes, and so on.

While companies have focused on Costa Rica, Argentina & even Chile in the past, they are rapidly discovering the closest, most obvious choice: outsourcing to Mexico.

The information technology outsourcing industry in Mexico is mature and globally competitive.
Because of its proximity to the United States,  same time zone, the cost saving and ease of travel (over 300 flights go from the US to Mexico every day) Mexico Outsourcing provides to the American companies the possibility to easily work with their lead IT teams in Mexico.

USMCA membership provides an added advantage, in that intellectual property rights are protected along with a free flow of goods and services. Additionally, there are no travel restrictions between the USA and Mexico, as there are with Indian companies (foreigners can only make one trip every 60 days).

Mexico has positioned itself as a highly competitive destination to outsource software development, and the Government is motivated to increase its share of the tech industry.

In 2002, they launched a program to promote the software outsourcing Mexico's technology industry and the goal was to increase it to over $15B annually by 2013.

This move has already paid dividends, as evidenced by several new companies that have formed, focusing on everything from Game development and Animation to Enterprise Software, Cloud Computing, and IT Services. 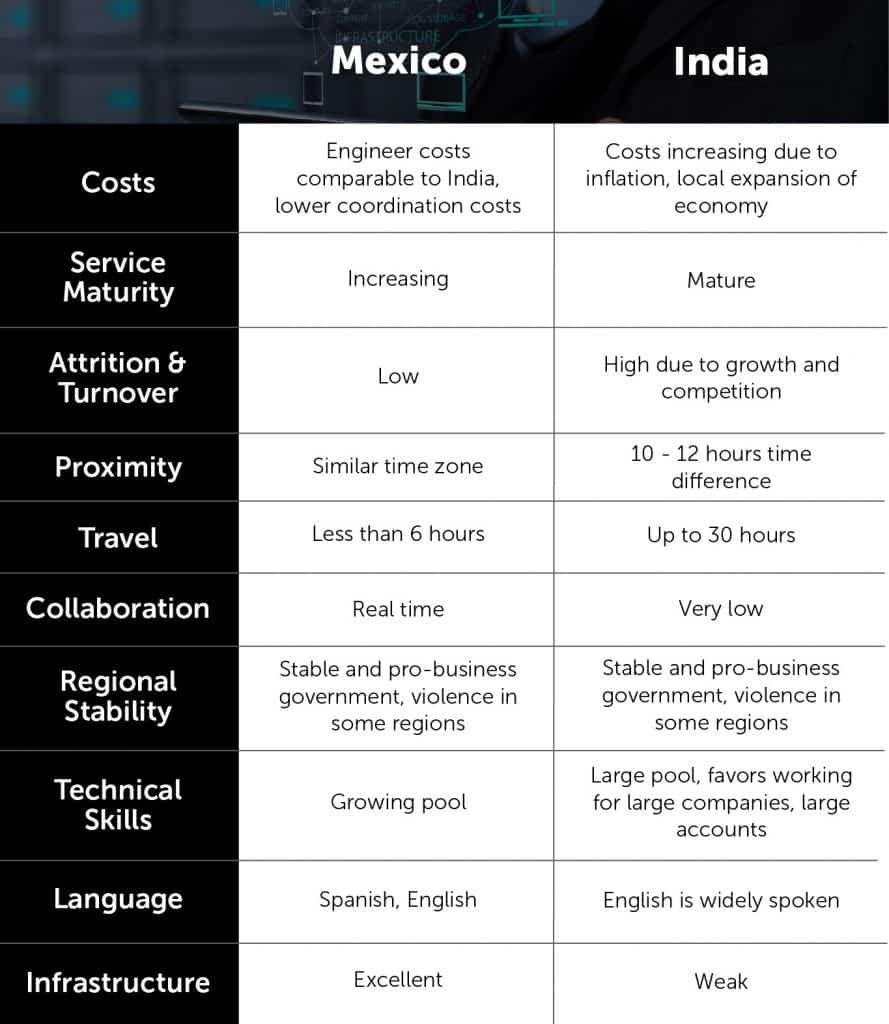 Unfortunately, the constant news of drug violence that permeates our media has negatively impacted our perception. The fact is that the violence is localized to mainly border areas, while the IT outsourcing hubs have not experienced anywhere near the level of violence that plagues the border cities (Juarez, Nuevo Laredo, Nogales, etc.).

In fact, only Juarez made the top 25 most dangerous cities for off shoring according to CIO Magazine (and note that two cities in India are in the top 10).

Let's keep in mind critical value is in talent, delivery processes, and outcomes. The offshore development bargain labor rates tell only a fraction of the story about offshore outsourcing costs. There are tangible and intangible added costs of teaming up with a company that is across the globe, like strenuous flight hours, jet lag, and travel expenses you'll shell out in the interest of maintaining an adequately cohesive relationship with a foreign company. Travel is, frankly, expensive, and unless something changes it’ll continue to increase. Read more on the hidden costs of offshore development.

IT talent in Mexico?

The size and quality of a location's labor pool is a critical factor of its' value proposition while evaluating different options for software development outsourcing. Over the past decade, Mexico's reputation as delivery destination has been bolstered by the positive experiences of global ITO firms, including many from India that eyed cities like Guadalajara as a base for expanding operations across the Latin American market.

There are over 500,000 IT industry professionals, 85,000 STEM graduates per year, and thousands of tech companies in the ecosystem.

If you'd like to explore further about Mexico as a Nearshore location through Gartner's criteria for selecting software development providers, check out our interactive landing page.

Real time communication and collaboration is key for high-quality, low-cost, and time-efficient software development. According to Meta Group, lags in productivity thanks to communication issues can add as much as 20% in additional costs to an offshore contract. Working with a team in a different time zone means you must manage your project around the clock. With less overall time during which your trading hours overlap, a problem may arise on Monday, get checked up on Tuesday, and won’t be solved until Wednesday.

Our Software Outsourcing Company with headquarters in Austin has a software delivery center in Guadalajara and recently a New Delivery Center in Aguascalientes a refreshing trip as opposed to Indian outsourcing--trust me. With nearshore software growing tech talent and untapped potential, the outsourcing software development services and extended teams to Mexico is a viable option and is worth further consideration.

Enterprise & Mobile Apps: A Match Made in Heaven →