First, Xamarin is a software development company created by the former developers of Mono Open Source, which was bought by Novell.

Mono open source is specialized for Microsoft's .NET Framework based on the ECMA standards for C# and the CLR (Common Language Runtime). However in 2011, Xamarin announced that Novell had granted a perpetual license for Mono, MonoTouch, and Mono for Android to Xamarin. According to the specific OS target, it is often called as well:

The platform works a little bit different if you run are developing on OS X or Windows. In this post, I test it on Windows.

Let's try cross-platform Xamarin Studio and visual Studio with a basic software development tutorial: Creating buttons. We'll see how can many errors could appear and how to solve them.

There are two ways to start coding a mobile app using an IDE:

Just check if the path configuration is ok: 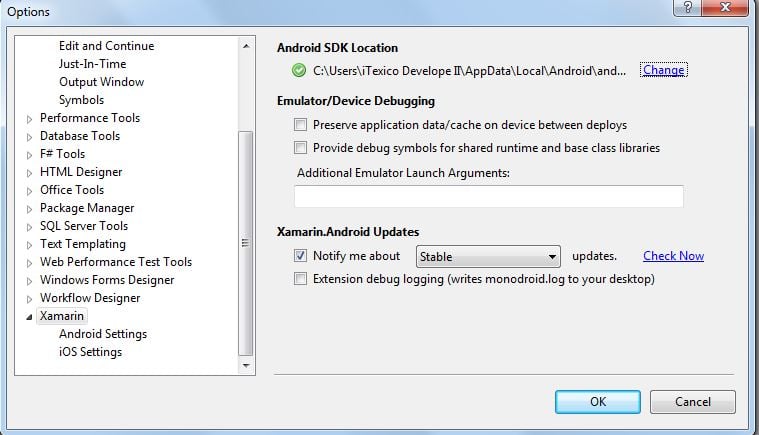 NOTE: Be sure you have a Xamarin account, if not you need to create one to use Xamarin in Visual Studio, otherwise an alert window will pop up asking for a Xamarin Business Edition or higher to continue.

Just check if  the path configuration is ok: 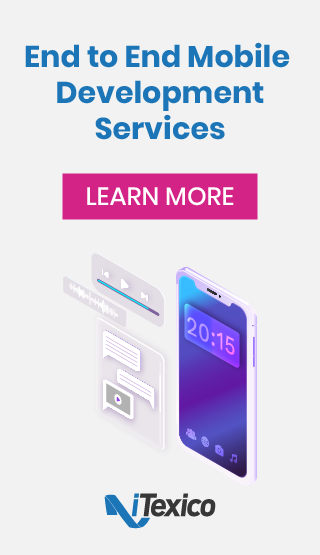 For this example we will create the famous Hello World, a custom text used for software testing.

Practically the same, here could apply a “tomato, tomatoes”

What's inside each folder?

1.-Before start the Emulator 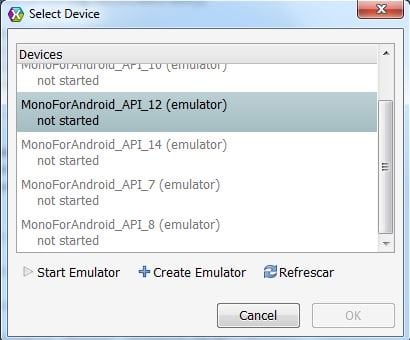 2.-After starter just choose it 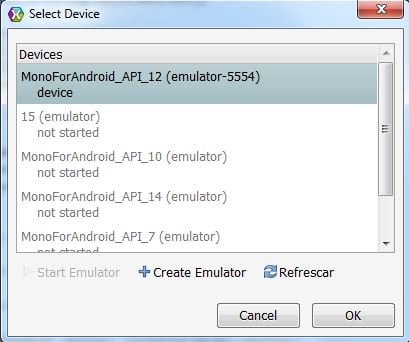 Warning for Xamarin Studio: If you run your mobile app project and you see this in the error list

Take a look on the next link to see how to solve it here. After that, restart Xamarin Studio

1.-Before start the Emulator 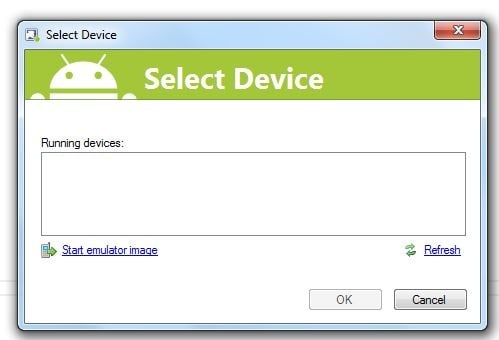 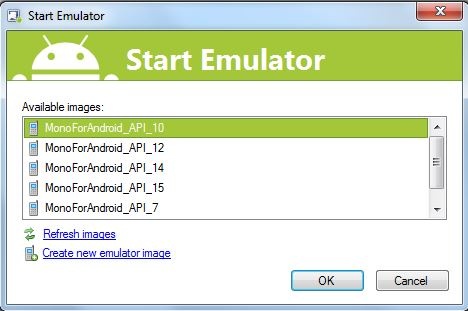 3.-After the Emulator started, select OK 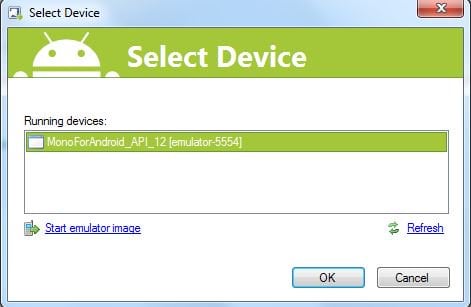 Creating the User interface with Code

Deploying and launching the mobile app 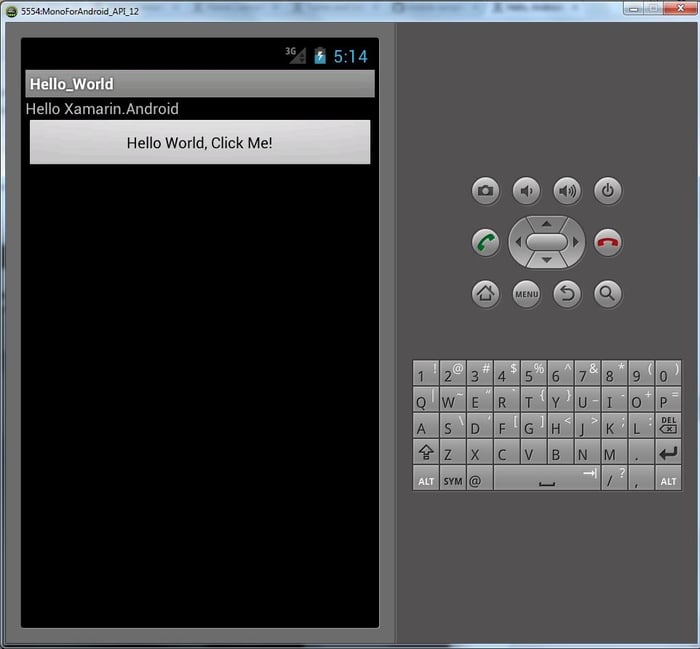 In order to learn more about Xamarin, you can clone the monodroid-samples located on github. Just open the solution NotePad-Mono.Data.Sqlite or whatever you want, but if your Resource.Designer.cs file is broken (a warning sign) the app won’t run.

Also, it is possible you see this in your error list "The name resource does not exist in the current context" 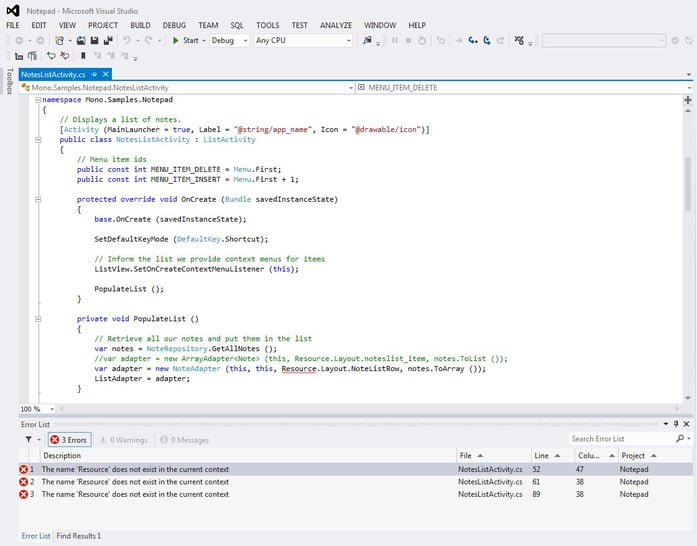 But don't worry about it here is the solution:

1.- Change the build action to None in the First activity that it is execute (NotesListsActivity.cs) and the Resource.Designer.cs 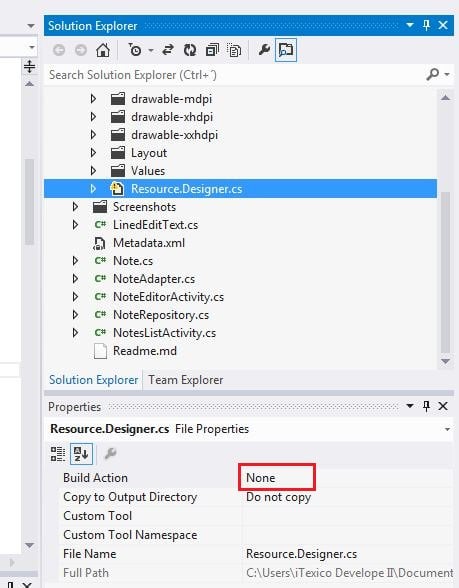 Then change the Build Action to Compile in both cases 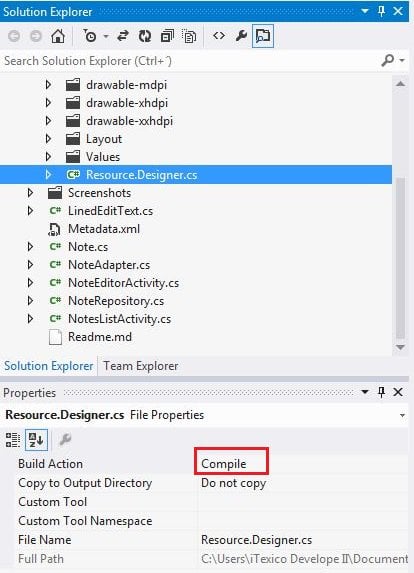 After that, go to the Build menu and then click on build solution. And the errors disappears!

Feel free to comment this post. We like to know what you think about it. If you have not hear about Xamarin yet, keep calm and know Xamarin!

Jesus Jimenez is a Computer Science Engineer at iTexico. He has been involved in Java for Web, PHP and SAAS projects, and contributing to Open Source projects. In his free time, Jesus likes to spend time into learn programming languages like Python, Ruby with Gnome and dive into frameworks like Bootstrap, and Meteor. He currently works as Xamarin Mobile Developer at iTexico.