The Top 7 Reasons No One Cares About Your Mobile App

Reasons No One Cares About Your Mobile App

It’s a time-honored question -- if a tree falls in the forest, but no one is around to hear it fall, did it actually make a sound? Though the answer to that ditty is the subject of more than a few dinner table arguments, we can answer more positively about the following:

If your mobile app is in the Google Play and Apple App Store, but no one is downloading it - did it actually help your company?

The answer, quite obviously, is a big “heck no.” In a previous blog, I wrote about how more than six million mobile apps currently compete for attention in the libraries of the two biggest players, Google and Apple -- yet, most languish, unseen by human eyes. In fact, some studies have indicated that up to 95 percent of apps are never downloaded -- and a significant percentage of those lucky enough to get a shot are deleted within 48 hours of making the small screen.

One thing is abundantly clear: Despite these depressing statistics, the mobile device isn’t going anywhere -- we will be shoving the latest smart gadget in our purses or pockets for a long time to come.

So, given this potential, why do apps fail?

I’ve spent my career gazing at computer screens that have continuously grown ever thinner, lighter, and more beautiful... while the computers driving them gain more power and influence in our daily lives. I have designed, developed, directed and advised 100's of different apps in my career. And today I am blessed to serve in a leadership capacity at a great software development company. We’ve learned that right way and wrong way of building software, and it is in this vain that I present to you the top seven reasons why nobody cares about your mobile app -- and what you can do about it.

With so many mobile app options available to consumers, keeping things fresh, dynamic and in step with consumer expectations is critical. If your current UX was cool back in 2010, it should be no surprise why it’s not getting the traction you want. Other ancient practices that could be afflicting your app:

Is your app prone to crashes, or simply won’t work on some devices? Apps that are simply not build to handle the rigors of today’s consumer -- who, by the way, expect an app to load in about two seconds, according to a recent study -- will inevitably fail. According to the advocacy website RuggedSoftware.org, consumers demand apps that are available, survivable, defensible, secure, and resilient. To succeed in delighting users expectations, your app development culture must be one of rapid evolution that is focused on the goal of “antifragile” apps. A mindset around DevOps and automation are considered to be the new competitive advantage in the world of app development -- test, release, repeat. 2019 is considered to be the Year of Automation -- if you don’t have an automation initiative in your enterprise, it’s time to grab and run with it. Want to learn more about this cultural shift? Make Gene Kim’s amazing book on the topic required reading among your IT executives.

3. You’re Not Being Scientific

Behind every successful app are the users who flock to it. If you’re actively learning about their wants, needs and desires, you simply have no visibility into the behavior that will make your app a success. Remember, we can’t improve what we don’t understand. You’re not in the business of running experiments -- you have real dollars riding on success. A sound, consumer-focused mobile strategy requires:

Sometimes, apps land with a plunk when they don’t endeavor to solve a real problem experienced in the daily lives of their users (in my experience, this is more common than you might think). Along with the culture change suggested above, you need a MINDSET change toward what we call “Design Thinking” -- this ensures you are building the app for your users, and not your stakeholders. If you aren’t already doing so, adopt a Lean or Agile approach to app development which features regular design sprints, regular interviews of users, and regular iterations focused on improvement. You need to gear your machine to rapidly move through these five key steps:

Sadly, users simply have no compulsion to download another app (one statistic indicates that nearly 50 percent of smartphone users haven’t downloaded a new app in over a month). GIVE THEM A REASON! Today’s the day to test new ideas, and to consider additional ways to engage your users outside your app, so they’ll want to dive back in. Innovation is a commitment that now, more than ever, requires focus and scientific discipline moreso than just raw creative thinking. I believe there are seven truths of innovation that must exist in order to move the needle:

6. Your Team is Holding You Back

Do you have a culture that prohibits investment? If your stakeholders are not giving you the right leeway to advocate for the users, you’ll be stuck in your tracks. Even at the team level, we often see a friction between design and development teams that can be fractious and divisive. This often devolves into a believe that development teams are just their to fix bug tickets and pull stories from the backlog. Eventually, any excitement that existed around mobile app development is out the window. No one is accountable, and there’s no one on your team with “product” in their title.

Step away from the gaze of the screen and remember, behind every successful app are humans who care more about the emotional investment in the relationship than the code that makes it great. It’s time for tech to bend to the needs of the human. The job of mobile is to ensure more human productivity. That’s why it’s critical to double down on your investment in R&D -- particularly around artificial intelligence, which is already having a huge impact in bringing a “human” touch to app interaction. Tech will continue to evolve at a smoking fast pace. Smartphones apps now have the capability to speak, listen and understand. Explore this area! And leverage emerging tech to create a sense of delight in your users.

Again, to be successful, this cycle relies on an agile team that ultimately can integrate new features into your product.

And finally, remember, discovery is a continuous cycle -- be sure you are constantly identifying opportunities and solving hard problems, and you’ll be positioned to build better products.

Make today the day you anoint a “product owner,” and restructure everything you do to champion that person’s role, and the product itself. A seasoned product manager will lead your new culture of discovery and innovation (if you followed my advice, above) and ensure that you are willing to experiment and test, unafraid to fail, and constantly iterating, iterating and iterating.

In a “product first” mindset, you’ll find that risks are identified and tackled up front, and not at the end. Products suddenly gain more definition, and are designed collaboratively, rather than sequentially. And the problem-solving culture will ensure your release is truly embraced by the end user.

At iTexico, we understand that mobile is changing and we are changing with it. We are ready to help our clients elevate their approach to mobile strategies to meet modern demands with a user-centered product approach. To learn more about this framework, which we call MobiApp Services, give us a call.

Top 7 Reasons Why Nobody Cares About Your Mobile App... and What To Do About it 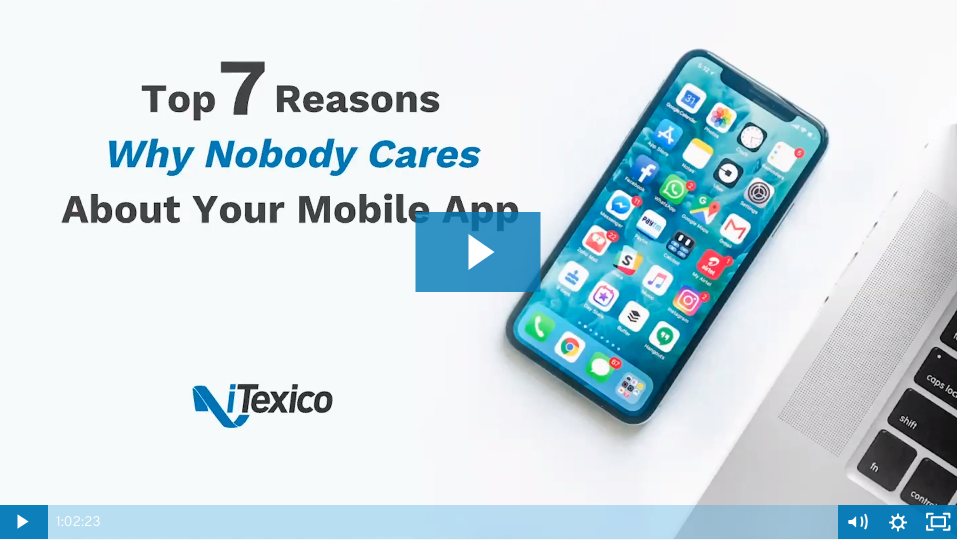 ← The Benefits USMCA Brings To Nearshore Through IP Protection