According to its website, RVM is a command-line tool which allows you to easily install, manage and work with multiple ruby environments from interpreters to sets of gems. It’s basically that!

There are three ways to install and configure RVM:

In this mini-tutorial, we'll only cover the Single-user installation. If you want to learn more of how to install RVM using other ways, you can look at the documentation in the link here.

1.- First, you need to have GIT and curl installed, then download and run the RVM installation script, in a terminal, type this command: user$ curl -L https://get.rvm.io | bash -s stable

Here, we're using curl to download the script and runs the script in a bash shell (we're installing the stable release version of rvm).

2.- RVM needs to be load into our shell session as a function.  In Single-user installations, RVM function is automatically configured for every user on the system. So in this step, we don't do nothing.

3.- Close out your current terminal or run the following command in order to reload the session:

If all is right, we should see the output "rvm is a function"

Using RVM to set up different environments of Ruby

That means we don't have any version of ruby installed yet.

1.- Install a new version of ruby:

To install a new version of ruby, we only need to run this command: user$ rvm install 1.9.3 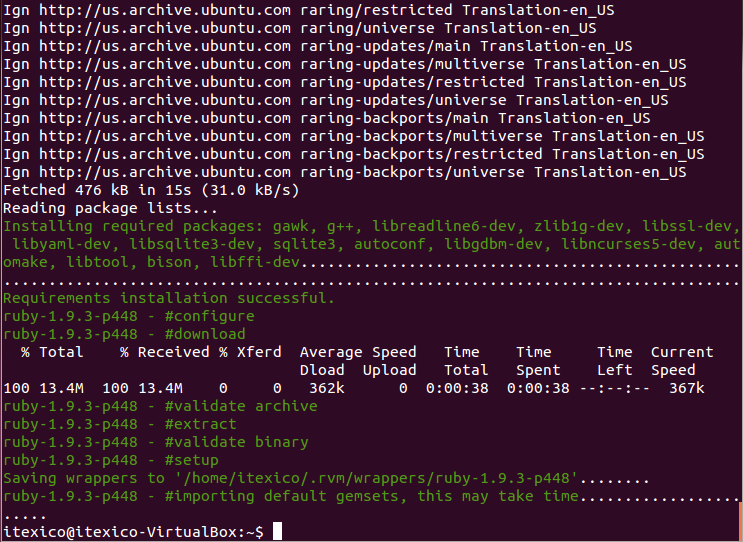 With this command, we're telling RVM to install ruby version 1.9.3 easy, isn’t it? (The same process to install any different version of ruby)

If we want be sure that the version 1.9.3 of ruby was installed, we can run the RVM command to list all versions of ruby installed: user$ rvm list

We should see our new version installed

2.- Use an specific version of ruby:

In order to show you how is possible to switch between different versions of ruby, I have installed another version of ruby (1.8.7). It was installed just like we did in the before step (with the version 1.9.3). This means that now I have two versions of ruby installed and when I run the command: user$ rvm list

Now if we run the ruby -v command to see what version of ruby we're using, we will get an error like this:

Why is this error? This is because we have not told RVM which version we will use, so, to use a specific version we only need to run this command: user$ rvm use 1.9.3

With this command, we're telling RVM to use the version 1.9.3 of ruby. Now if we run the command to list the versions of ruby installed (rvm list), we should see something like this:

Notice that now the version that we're using has a mark ( => ), as you can see in the image, this mark means "current" and there are another marks =*(current and default) and * (default), you can look at the documentation at RVM site to see how you can tell RVM to set a default version.

As we can see, change between versions of ruby is very easy to do, for example If you want to use the version 1.8.7 of ruby you only need to run the command "rvm use" passing the version to use as param.

We had learned: how we can install many different version of ruby (and use it)! If we want to manage many different versions of gems, RVM gave us a powerful tool called Gemset. A gemset is a set of gems that we can use almost exclusively. So, we can have several gemset and use it in wherever project we want.

To create a gemset, we need to select a version of ruby we want to use (if we did not before) and run the following command: user$ rvm gemset create my_first_gemset

With this command, we're telling RVM to create a gemset with the name my_first_gemset

To see the gemsets installed. we only need to run this command: user$ rvm gemset list

3.3 Use a specific gemset

To use a specific gemset, we only need to run this command: user$ rvm gemset use my_first_gemset

Now that we're using a gemset, all gems that we install will be part of this gemset. Therefore, we can install a gem with different versions in different gememsets.

RVM is an amazing tool to manage our ruby environments! It's an easy way to switch between different versions of ruby and gemsets becomes it a powerful tool.