One can only imagine the feeling of exhilaration when the Golden Gate Bridge in San Francisco opened to the public. After spending centuries waving at each other, people on both sides of the waterway now had an easy and efficient way to get closer. No more swimming across the bay or taking a long way around.

Today, mobile app developers and engineers are experiencing the same sense of excitement around React Native – a new way to develop mobile applications that deliver a finished product for both iOS and Android at the same time...

What Is React Native?

No more coding, and recoding, to get an app working on both dominant mobile app platforms – or, worse, making the cost-cutting decision to develop for one platform, and not the other.

By choosing a Javascript-only standard, React Native bypasses the normal barriers that prevent a single purpose-built mobile app from working on multiple platforms. Apps written in React Native, as the name suggests, render natively on both iOS and Android platforms. All you need to do is create the code in JavaScript and make minor adjustments to ensure it fits the UI of your selected platform. The code is then rendered to iOS and Android code providing a native look and feel.

This ultimately saves valuable development time and generates better development experience, as a developer can create one code base that will fit any platform, as a cross platform development without needing to learn iOS and Android programming languages. 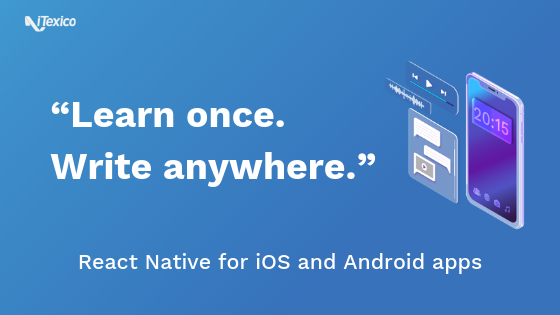 How Can React Native Application be Important to Businesses?

By creating a single framework that functions simultaneously, upon release, for both platforms, companies can efficiently deploy mobile apps while saving time, money and resources. Further, since React Native is UI-focused, app users will enjoy streamlined loading times and an overall smoother function.

Who is Currently Using React Native?

React Native isn’t just a hit with small and mid-market companies looking to be cost efficient. Because React Native apps are launched and maintained more quickly than its counterparts, it has gained favor with some of the biggest enterprises in the business, including:

What are the Pros of Using React Native Apps

Let’s dig deeper into the benefits of React Native as a next-gen app-building ally:

“If the developer wants to change an object, he/she would have to modify its state and apply updates accordingly – meaning only allowed components will be upgraded.”


What are the Cons of Using React Native Apps

As universally appealing as it may seem, React Native may not yet be the “killer app” for everybody. Here are some important considerations to bear in mind:

React Native is a necessity for enterprises looking to speed their mobile app development projects to completion.

So, is React Native right for your mobile app project? Offering universal appeal and time-saving leaps forward in development resources.