The development of mobile applications has become one of the largest industries of mobile technologies and hundreds of thousands of apps exist for mobile users in almost every category: game s, lifestyle, social networking, education, business, etc. In the Apple App Store alone are more than 450,000 iPhone/iPad Apps and counting, many are even free, but many others are not which means mobile applications are truly a growing source of business. 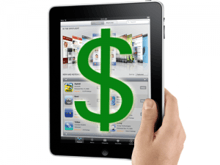 Making relevant and engaging mobile apps is a smart idea for developers and entrepreneurs who want to cash in on the mobileApp craze.

Developers of iPhone, iPad and Android are asking what is the best business model for generating revenue from mobile applications?  There are a number of ways to monetize a mobile app and each has some advantages and disadvantages.  It is the developer’s job to find out which model suits their App.

The following are some revenue models app developers are currently using:
Any app publisher or app developer can be successful in generating revenue using mobile applications. However, in order to make the most of their development efforts they must ensure that they understand their app objectives, plan for user engagement, retention, and revenue generation.

← IT Outsourcing - India vs. Mexico