Redux Explained In a Simple Way

Curating a user-friendly experience goes deeper than a simple website layout overhaul. Designing your site functions to attend to the regular needs of the user incorporates a variety of techniques, disciplines, and UI coding that bring the experience as a whole to a simplified, intuitive framework. That means accounting for mobile-first design, allowing accessibility across multiple mediums, devices, and platforms. No matter the architecture, accounting for user interactivity to streamline the delivery of information, data, and resulting changes in component states is essential for creating a stable, effective application.

Handling app interactivity through the app development process can run along two separate design approaches: SPA (single page application) and MPA (multi-page application). While both are viable choices, they vary wildly in how they benefit your Javascript application’s overall functionality. As more users interact with your application, the likelihood of unforeseen, unwelcome actions that could potentially throw a wrench in your application’s operations rises. Enabling communication, sharing data, and optimizing app operations by allowing components to freely control, read, and share data is critical for effective management and utility.

In traditional development, MPAs reigned supreme. While still used due to its greater propensity for SEO integration and scalability, its popularity has waned as competing app development approaches have surfaced. MPAs are applications that work with many pages on an application, wherein navigation takes users through multiple pages that need to be individually loaded.

For example, if a user needed to submit a form, they had to fill it out first and click submit. From there, they would be redirected to another page, where that submitted information would be validated. Now, user error is always a factor to consider. They might have accidentally filled in incorrect data, or perhaps a communication error would occur that affects the data provided in the initial form filling. If any unexpected changes occur, the user would then be redirected back to the original form page to fill it out again.

Each time a new step is taken, all the relevant information has to be tracked, shared, and validated on a completely new page that needs to be freshly reloaded. As you might imagine, MPA formats aren’t known to work quickly. They’re slow, clunky, and rely on interconnectivity with multiple other pages to function as expected. It’s a headache. Thankfully, app developers have been steadily moving away from using MPAs as the industry standard. The presence they once held as leading the leading application design framework has dwindled. You’re much less likely to run across an MPA now compared to several years ago, and for the most part we’re all the better for it.

The dawning successor to MPAs are SPAs, otherwise known as single page applications. With the help of Javascript and SPAs working in tandem, the flow of data has evolved. Now we have asynchronous requests, faster loading, and quicker response to issues. If errors occur, SPAs can notify the user without losing data and respond more efficiently to error management cases.

What is an SPA?

An SPA is a type of application that runs under a single file. Unlike MPAs, which are composed of several web pages, SPAs aren’t bound by the same restrictive format associated with managing a large number of individual files and pages that make up an app’s architecture. All interactions take place on a single page, streamlining communication and operations.

The single file that an SPA uses tends to be an entry point to the relevant application. It’s an HTML file that incorporates user interactivity into its design thanks to Javascript integration. This level of interaction is only possible because all routes and interactions with the user are accomplished through Javascript scripts, in addition to other resources such as Javascript libraries like React or frameworks like Angular. SPA works with async requests, enabling each page to run under a single, unified page. Essentially, all the “Pages” shown to the user are “Virtualized” via Javascript.

With SPA’s core function in mind, let’s imagine that we have an application that works with massive amounts of data including:

All the data generated by these functions must be administered by the web browser. At this moment, we need to introduce a new concept fulfilled via SPA utilization: State. An app’s “State” is essentially a large Javascript object that allows the developer to add and consult with all the data their application needs. However, this level of management alone is insufficient. What happens if a developer begins pushing data to that object and it results in replacing important data that eventually cripples the app entirely?

It’s possible to manage this data on your own, but the effort, time, and cost involved is unfeasible for most developers to handle. Can it be done? Yes. Is it worth it? With tools to help mitigate the task work on the market, there’s no reason to force developers to put hours upon hours of work into state management. You can manage that information without libraries, but the flexibility that libraries offer developers looking to manage their app states is invaluable. Libraries are helpful resources that are designed specifically with state management in mind, enabling greater control, maneuverability, and management over data generated within an application.

Redux just so happens to be one of those libraries.

Handling the flow of data your application creates requires the support of dedicated services and tech that automate certain functions your developers would otherwise have to manually contend with themselves. What’s available has to be accessible, centralized, and effective in order to maintain a stable, streamlined interface. To that end, Redux is a library created for easy integration with a given platform to manage the states of a Javascript application. Utilizing Redux offers several efficient features:

● It is centralized to a single source of truth. This means that all the data necessary for developers to add or consult will always be allocated in the same place, known as the Redux Store

● Redux is debuggable, providing specialized Redux DevTools that can be used to inspect and check the flow of data.

● Redux offers expansive compatibility with many UI frameworks and libraries, used for both the frontend and backend of an application.

Let’s further simplify what Redux is, for clarity’s sake. As a tool, Redux is structured in three parts: Actions, Reducers, and a single Store. These components make up a cycle, where data flows through in a continual process from the UI to each individual component. 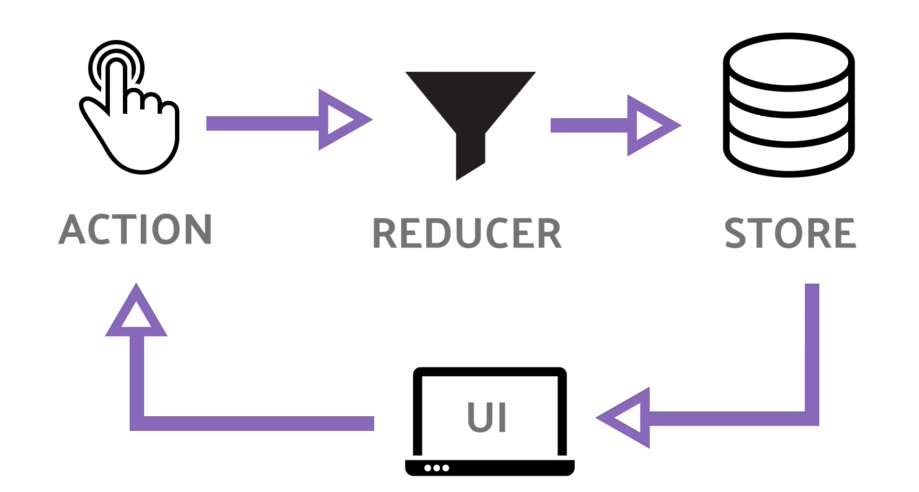 Actions are, put simply, flat Javascript objects. Whenever there is a piece of information that developers would like to store/update in the Store, that process starts with the Actions. Now, it’s important to further clarify that Actions must be made up of two keys:

2. The payload containing the information that will update the Store

Actions are the first step in the data cycle. This is because the Actions are dispatched by the user interface, whether it's from a click user or some other individual. 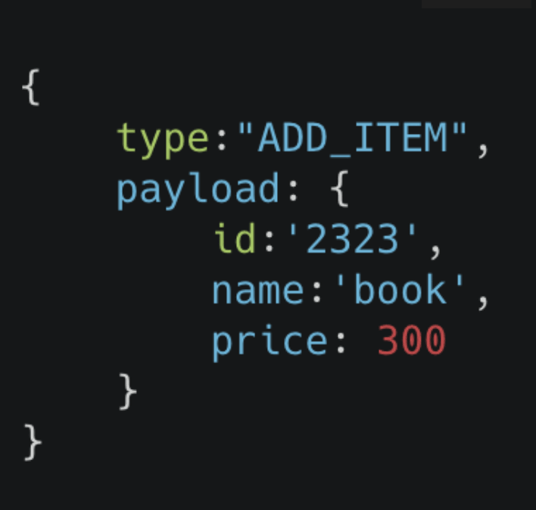 Like we mentioned before, the payload key is the value containing the data the developers want to send to the Store.

We’re making progress, but how are we going to go from our UI to a flat JS object? To accomplish that, developers will use a function that receives the parameters of your UI, returning an object which must be formed with the keys/values that had already been commented. These functions are known as the Action Creator.

Wait a minute. Actions are plain objects, we know that, but what about when developers need to work with API calls or some async requests? Well, as mentioned before, Redux is highly flexible. There are some libraries that can be integrated with Redux for specific scenarios like this.

With this, developers now have their Action with TYPE and DATA. Remember that the data is the information that developers want to send from the UI to the Store. What follows in the cycle after Action is the Reducer.

The Reducer is a pure function that receives the current state of the application as well as the Action. The Reducer obtains the value of the action “TYPE” and, based on this, it will decide what it has to update in the Store. At the end of this function’s execution, what returns to the developer will be an updated status which provides visibility into the action when the developers need it.

Here is an example of a Reducer: 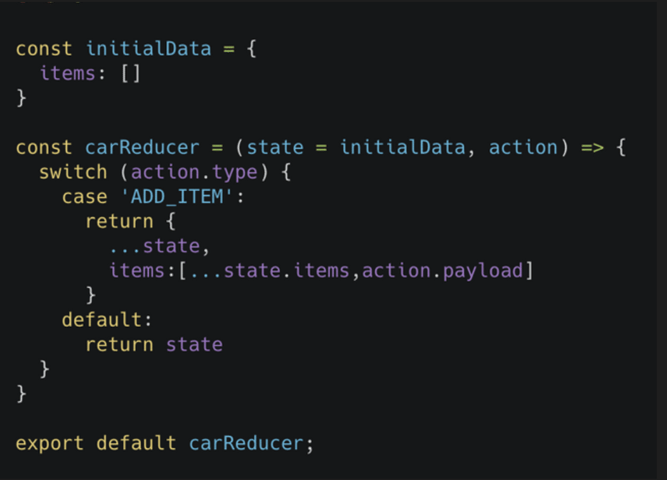 We’re through the complex aspects of Redux. All that’s left in the cycle is the Store. At this point, following the Action being sent to the Reducer, the Store is updated with the data originally sent by the UI. This is the last step of the flow, where developers use the Store in their applications to gain access to needed data. Remember that developers have Store accessibility in every one of their applications.

Following this, the cycle has come full circle. The data flow within Redux is complete, providing developers with effective State management resources, tools, and methodologies.

Redux isn’t the only library on the market capable of providing extensive State management capabilities. It is, however, among the most popular. It’s widespread compatibility with various platforms and applications makes it a versatile and intuitive tool to be leveraged by your developers. The result is a simplified workload without excessive training for full-scale implementation.

Improving is a leading firm across the United States and Canada for digital services and outsourcing, including QA and testing. We are now also including operations in Mexico with a nearshore delivery model service offerings. If you want to learn more about what we can do for your company, visit us at our contact page.

Nearshore Outsourcing: When and How to Do It

Nearshore outsourcing is the most cost-efficient solution for completing your projects. Check our On-Demand Webinar and learn more about it. 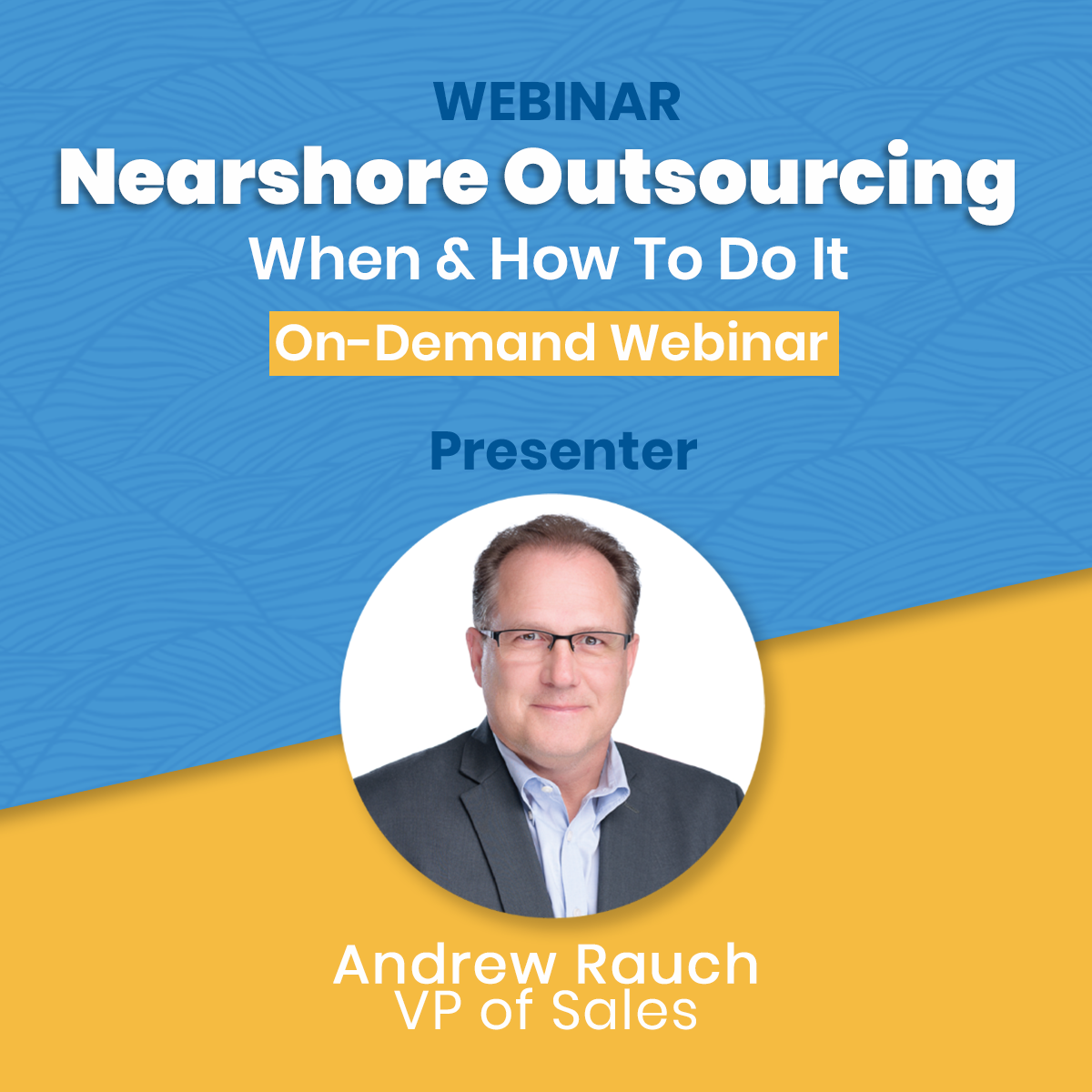 ← What is Cloud Adoption and Why it is Important?