The Hottest Tech Jobs for Software Developers in 2018

The Hottest Tech Jobs for Software Developers in 2018

For generations, dreams of superstardom and riches usually involved a musical instrument, microphone or camera.

It has almost always been true that fame and fortune would follow those who became rock stars, models, and movie stars. For boys and girls, there was no career dream that was more satisfying.

According to the U.S. Bureau of Labor Statistics, employment of software developers will explode by 24 percent between now and 2026 – faster than virtually all other occupations. Already well compensated, with a median income starting at $100,000 (though some Google superstars earn more than $1 million annually, according to Forbes), this upward trend is expected to continue as demand for their unique skills swells across the globe. 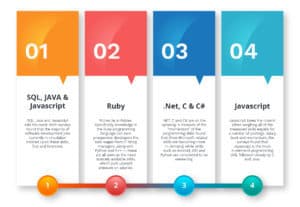 SQL, Java and Javascript rule the roost: Both surveys found that the majority of software development jobs currently in circulation insisted upon these skills, first and foremost.

Riches lie in Rubies: Specifically, knowledge in the Ruby programming language can earn prospective developers the best wages from IT hiring managers, along with Python and C++ -- these are all seen as the most scarcely available skills, which puts upward pressure on salaries.

.NET, C and C# are on the upswing: A measure of the “momentum” of the programming skills found that three Microsoft-related skills are becoming more in-demand, while skills such as Android, iOS and Python are considered to be weakening.

Javascript takes the crown!: When weighting all of the measured skills equally for the number of postings, salary level, and momentum, the surveys found that Javascript is the most in-demand programming skill, followed closely by C and Java. Considering its ubiquity on nearly all web pages on the internet, and the increasing eminence of JS frameworks, it’s not surprising that Javascript has cemented its dominance atop the skills list.

Ahead of the curve -  Delivering tech skills

So, how can your company stay ahead of the curve, and ensure it has a command of the latest and most demanded skills? at iTexico - we offer software development teams "for hire" that can come in and work alongside your software developers or supplement your skill sets - are a great way to ensure competencies are kept, deadlines are met, and projects are delivered on time and on the latest specifications.

If we at iTexico can be of your service in helping you to keep your software development teams-and goals- up to date in 2018, please let us know.

← The Digital Transformation: Is Your Business Ready?