Why You Should Take a Mobile-First Approach to App Development

Why You Should Take a Mobile-First Approach to App Development

Within a relatively short amount of years, phones have evolved from a communication-exclusive commodity into one of the biggest outlets that the worldwide population has for interacting with the world. Mobile devices serve as an info-driven database, news outlet, entertainment, human connection, and as the first impression businesses leave on prospective customers.

App development has begun taking the much desired shift towards appeasing the middleman for the right audience: the mobile-first approach. The user’s mobile experience in relation to your business is a critical juncture in whether or not they will continue to interact with you in the future. The mobile-first approach is the methodology that embraces the user’s experience first and foremost for app development, focusing on design, development, and marketing that appeal to an integrative mobile interface.

More than half of all online searches are now being performed on a mobile device. We are constantly connected to the internet, and more than 85% of customers agree that a company’s mobile layout design should be equal or superior to the desktop alternative. Convenience is key in the modern age, and there’s nothing more convenient than a smartphone. Mobile-first app development allows you to prioritize optimizing for mobile users, thereby accounting for the majority of web users that you might otherwise lose patronage of.

What is Mobile-First App Development?

The concept of a mobile-first approach is simply understood enough, but we’ll do you one better than a superficial answer. There are two different types of web users: mobile and desktop. First and foremost, mobile-first app development prioritizes the former, ensuring an ease-of-use experience typically intended for a small screen and one hand. This means that the web design for your desktop users comes second to your mobile users. Desktop users should still be able to interact with your site fine, but the experience should be even better on the phone.

So what does that actually entail? The mobile-first approach is the successor to the older “mobile-friendly” mode of design. Similar concepts, but mobile-first takes the practice a step further, since mobile-friendly app designs are losing appeal with 52% of web traffic being attributed to mobile users. With the updated design mindset, app development centers around creating responsive web design that looks good on any device, but specifically geared for a smartphone.

Mobile-first web design is only the latest methodology in mobile development, exceeding earlier, problematic trends. For example, an earlier trend revolved around creating a mobile-specific site that mobile devices accessed, essentially forcing you to care for two different sites. This lead to issues like being saddled with double the management work for maintaining your sites and the possibility that users would share the wrong URL due to sharing links between devices.

Why Should You Start Developing Apps with a Mobile-First Approach?

The technology market is inherently based on thinking ahead for what future developments may hold and appropriately conforming to meet new expectations. Software development is a constantly evolving field. Concerning the use of mobile phones, there’s little doubt that that’s a technology that, not only is going to stick around for a long time, but will become increasingly integrated in human society and culture. That means that the future will primarily be focused on mobile-first strategies to meet the inevitable course of innovation.

As mobile searches continue to rise year after year, it’s a safe bet that it has a strong future ahead of it too. Technology industry leaders have begun the transition between desktop and mobile user focus, with Google being of particular note. They’ve acknowledged the importance of mobile optimization, resulting in websites being indexed on Google through mobile-first. The impact this has on search rankings then places the burden on mobile users to drive scores.

There are two important takeaways from this. Firstly, the amount of smartphones owned exceeds that of PCs owned. This means that not only is it more likely that you’ll be able to reach a wider audience through mobile-first web design, there are people who are only capable of interacting with your organization through their phone. Secondly, up-and-coming generations are going to lead to further increase in mobile device usage based on these statistics. 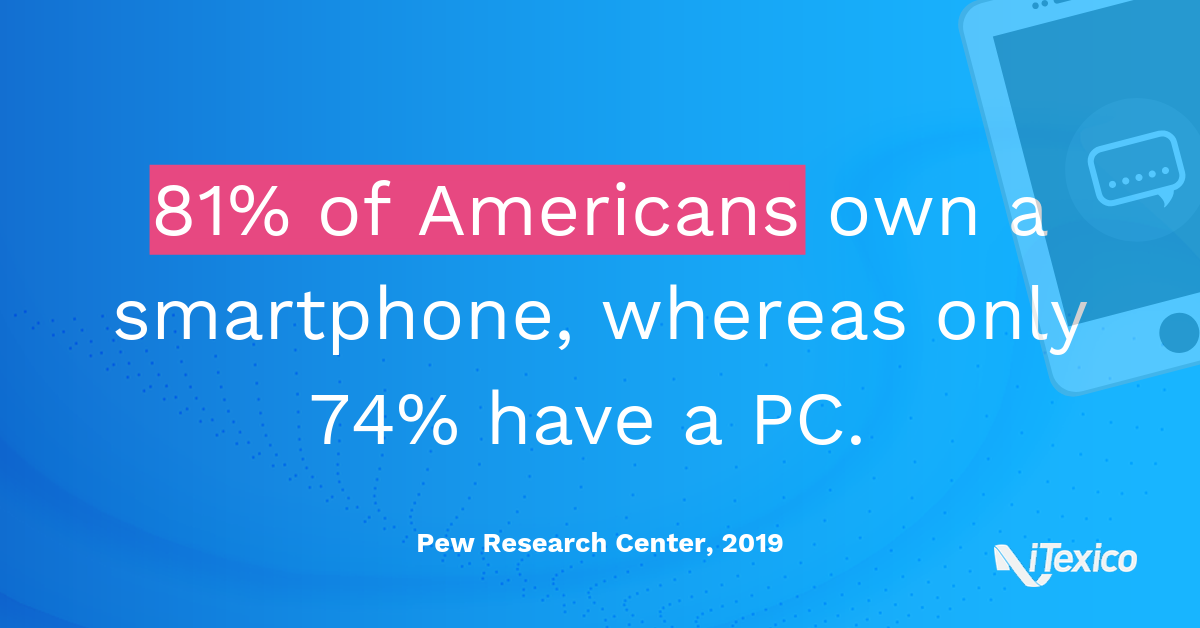 The separate schools possess their own qualities that help guide your app development, but their goals are the same. No matter how you go about it, the ultimate objective is having a responsive web design catering to the mobile user.

Now, responsive design not withstanding, whether you opt for the Progressive Advancement method or Graceful Degradation is going to rely on personal work and design preference. The differences between the two methodologies are laden with both their own unique strengths and weaknesses that are bound to impact the direction of your mobile-first app development process.

Think of the terms for these methodologies as originating from the point of view taken when starting the app development process. Progressive advancement, as compared to its peer, stems from the concept of starting from a base design and extrapolating on it to fit larger forms. The course of action in question should begin with the mobile design and then add features to make it more compatible with PCs and tablets.

Starting with the smallest screen, intending for the app to be viewed from the perspective of a mobile phone, provides a foundation to build upon when adapting the app for larger devices. You’re provided, via this method, with an optimized mobile experience. Considering you begin from a purely mobile designed standpoint with desktop users as a secondary audience, mobile usage is clean, rich, and much more intuitive.

But even with a mobile-first approach, you can’t entirely disregard your potential desktop users. The catch with a Progressive Advancement design approach is sacrificing the integrity of the desktop experience. Your mobile users will be greatly pleased since they’ll be working with a framework that was designed with mobile limitations in mind, but scaling up comes with kinks in the armor.

Once you move up to larger devices, you may find that the cohesiveness achieved on a mobile device is missing and lacking. As you’re adding on features that may not be initially included in the original framework, you’re vulnerable to forgetting key functions when deciding what should be included for PC and tablet layouts. Certain features like clickable components or dashboard graphics may be forgotten in the hubbub.

PC and tablets are separate entities from mobile devices with their own usage skills that may go unaddressed and ignored. You may succeed by ensuring an optimal mobile layout, but there’s a chance it’ll come at a cost to the performance and design quality of the desktop versions.

The yin to Progressive Advancement’s yang, Graceful Degradation sets about doing its work for mobile devices by starting from the wide perspective of a large screen device. Your designer will begin with developing a layout and framework intended for PCs and tablets, taking advantage of the large screen and functionality to flesh out the app. From there, the app can then be pared down and backtracked to fit a mobile device.

Starting with the larger capabilities available from working with a PC layout makes the development of the app much easier to grasp. The overall features and functionality that result from a graceful degradation-designed app tend to be broader and more effectively integrated into the programming. More advanced features generally mean a better, more robust experience for the mobile app.

However, just like with a progressive advancement-designed app, using the graceful degradation approach is not without its weaknesses. Since you’re starting from the perspective of the desktop user, the translation process for mobile users may not be perfect. The experience for mobile users risks being less optimized and may lose vital seamless functionality.

While not technically a recognized methodology for mobile-first app development, restraining yourself to exclusively using either one of the mentioned approaches may cause more problems than may be acceptable. You are not bound by law to adhere to either method perfectly, and you should feel free to employ whatever means necessary to achieve the greatest level of responsive design possible.

Taking a sort of hybrid stance in regards to app development isn’t uncommon, and more often than not can compensate for the weaknesses present in both structures. For instance, you may want to start off by designing an app that contains virtually every feature possible, no limitations. Now, the problem here is that while you may have an incredibly comprehensive, useful app, it may not be viable for mobile devices. Once you’re here, the next step is to shave off parts of the app and whittle it down to fit the specs of a smartphone.

This method may not perfectly account for the shortcomings present in the primary methodologies, but it’s nonetheless an option that may be valuable if the former options aren’t proving to be effective.

If you stopped anyone on the street, the chances of any one of them answering “no” to the question of if smartphones are going to die out in the near future is slim at best. With the appreciation for handheld technology growing and increasingly becoming indivisible from modern living, catering to mobile users is essential.

Mobile traffic outpaces desktop traffic, even if it’s only by a little bit right now. Judging by how mobile device usage has been trending for the past eight years, that traffic will eventually dwarf any other type of internet usage. In order to properly meet the oncoming tide, companies need to begin investing in mobile-first app development.

Whether you decide to opt for the progressive advancement approach, the graceful degradation approach, or a mix between the two, what matters is that the resulting app design can be appreciated and effectively, easily used by the common user.


Download our Free Whitepaper and learn more about why Nearshore outsourcing in Mexico makes complete sense.

← A Step-by-Step Guide to Cloud Migration