5 Reasons Why MEAN is the New Happy For Mobile, Web & API Development

5 Reasons Why MEAN is the New Happy For Mobile, Web & API Development

There is nothing that slows down mobile application development more than clunky, uncoordinated development tools. Poor tools can lead to poor outcomes, which take an emotional toll on both developer and client. 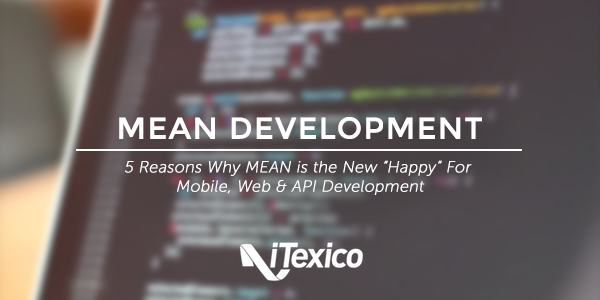 Perhaps it was in the wake of such a situation that Amos Haviv, a software developer, was pondering alternatives. Perhaps one emotion – that of feeling mean – led to a happy circumstance that has transformed the world of mobile app development.

MEAN, thanks to Haviv, now has a new definition – an acronym representing a free, open-source JavaScript software stack that creates great efficiencies for those developing dynamic websites and web apps. Launched in 2014, MEAN has gone a long way toward transforming the way web and mobile app development is undertaken.

The components of the MEAN stack – billed as “friendly and fun” on the MEAN.io website, include:

Developers across the globe are quickly discovering the myriad benefits inherent in the use of the MEAN stack.

Creation of a mobile app in the MEAN stack allows for quick, real-time edits of the salient details – more like an artist’s palette than a collection of files, chips and boxes.

2. One package, one language

JavaScript is now the only language you’ll need for proficiency in the world of MEAN. Both front-end and back-end tasks are unified under the JS umbrella.

3. Turn off the LAMP

Aspiring app developers no longer have to make the long climb up the LAMP mountain. LAMP, which stands for Linux (server), Apache (web server), MySql (database) and PHP (backend), was the prevailing standard. But it required a knowledge of both HTML and CSS, the aforementioned JS, plus a proficiency in à la carte SQL and PHP programming skills.

The inclusion of the Node.js platform in the MEAN stack provides an entrée into a world of modules that are ready to roll. Time that previously was spent “custom-baking” modules can now be invested in expediting the project to completion.

For experienced users – like those at iTexico – modifying and tweaking the stack to suit individual preferences or levels of expertise is a snap.

To that end, iTexico is forming a new technology practice that is focused on taking the MEAN stack and expanding it into what we call a {FullStack} development approach.  In this approach we will embrace the best-of-breed technologies at each level of this new modern stack.

Over the next few weeks, we will be starting an on-going blog series to explore each of the technologies included in our {FullStack} approach - specifically, their role in creating efficiencies in Mobile, Web and API development.

This article was originally published and written by Dennis Ashby Former VP of Professional Services and updated to keep the content fresh and relevant.